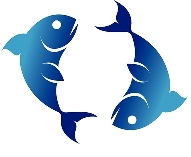 Pisces are born between February 20 to March 20. The symbol associated with Pisces is fish- actually two fishes swimming in opposite directions, one upstream and the other down stream. The symbol itself indicates the mental conflict in Pisces. The ruling planet of Pisces is Neptune, a sea god as vast, nebulous, Leep, mysterious and an unknown force full of energy as the sea itself. The planet imparts the Pisces with a high degree of compassion, dignity, beauty and divinity, as Leep as the ocean itself. It is believed that Neptune converted himself into a stallion to woo a goddess Demeter when she became a mare. Since then Neptune is also called the precursor of horse racing. Neptune, as a Greek god ruled over the lakes and rivers and is, therefore, associated with Pisces, the symbol of water. The romantic side of Neptune is related with dance, music and poetry, which are products of imagination, sensitivity and idealism. All these traits are naturally reflected in the Pisces people.

The Sun in Pisces represents Compassion, imagination and sacrifice.

Pisces people, as reflected by their symbol, remain in conflict, whether to go the easy way, flow with the current down stream or choose the challenging one, go against the current, take the challenge and swim against the tide. This inner conflict is reflected through the practical conduct of the Pisces people, which evokes contradictory impressions about them. Pisces people are the best self-analysts in all the zodiac signs. This virtue draws them closer to true and gifted mystics.

They do not allow their ego to determine the quality of their interaction with others. They yield more than they demand. They are Plutonic in their relationship seeking spiritual rather than physical pleasures. Since they are trusting people they can at times be duped into false relationships. Given the right partners, they can prove to be dedicated, loyal, faithful and affectionate spouses and parents.

They appear concerned mostly with the other world rather than the materialistic one. They are more emotional or instinctive than intellectual or matter-of-fact in their day-to-day dealings with the people. They cannot accept the rigid regime of the office type routines and wish to have their own working hours according to their convenience.

Pisces people can be great mimics, therefore, they become great and popular theatrical artists and as lawyers they can display their creative histrionic abilities. Being sensitive, they can become very successful stage artists who can display and imitate various human emotions quite accurately and convincingly.

They are peace-loving people and are averse to any frictional engagement with the government of the day or with any other organ of the society. They create their own dream world of peace, happiness and satisfaction and love to withdraw there. Pisces people are generally creative artists and produce great works of literature, art and music. They have a great love of art, beauty and nature and they also love to travel to distant and exotic places. They satisfy their wanderlust by working as librAries peoples, where they can read any number of books about exotic and strange destinations. They also love to work as astronomers where they watch the movement of the distant stars with their telescopes.

Pisces people have spiritual leanings and psychic qualities. They become successful psychics, mediums, mystics, counselors and priests or pastors. They can also become good detectives because they can pit themselves in the minds of the criminals and can anticipate how they work react in a given situation.

Pisces people can consult our astrologers and psychics at www.psychic.com.au to get their horoscopes made so as to understand their real potential by unleashing their positive traits and controlling their negative ones. The charts of their horoscopes will reveal the extent of the energy bestowed upon them by the influence of the planet Neptune and how they can put it to use for benefits both at the individual level and for the good of the society.