Roosters have revered in most cultures and traditions, magazines, because they usually crow, and wake up the rest, at the break of dawn. Well, in the Chinese zodiac, roosters also have a lofty place, as they are the 10th animal sign. Those who were born on the year of the rooster are generally described as generally happy, honest, punctual, frank and direct to the point. They however, can also be overly proud of themselves, and would love to be the star of the show always. Let’s look at the other notable traits of the rooster. 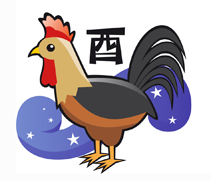 The 10th sign of the Chinese zodiac are the loyal Roosters. They detest mockery or deceit.  They always say what they feel and are very frank with the people around them, and they also expect the same treatment. These individuals are pretty happy when they are in a crowd. They fancy the limelight, since this is where they can show off their wits and charisma. This trait, can truly be a burden for some, since they want your full attention and will be very troubled if you don’t give them your concentration. They can be overly proud of themselves.

Chinese zodiac sign for Rooster when it comes to health are physically fit.  These individuals love sports and they usually have active hobbies like swimming and hiking. They are not the type who easily gets sick. When ill, they don’t have it very long, it goes away quickly.

People from this sign are very industrious and extremely motivated. These traits allow most of them to become successful in their chosen endeavors.  They are able to finish the task at hand.  Rooster can be dentists, bankers, insurance agents, actors, secretaries and dancers.

Rooster’s frankness and tough personality won’t blend well with people who are pretty sensitive and fragile. Their love ones should be tough and strong.  Beneath the Rooster’s tough and mean exterior is a caring heart that is full of love.  They are the kind of people who don’t kiss and tell.

Because the rooster is famous for crowing and signaling the break of dawn, people who are under the rooster birth sign, would of course, generally value punctuality and fidelity. Many people also equate roosters with good luck, because they have been used for exorcising evil spirits in the past too.  Roosters are deep thinkers, and are ambitious, resourceful, observant, intelligent, and are masters at communicating with others. They also prefer to dress up, and always look good. They love to get themselves busy always, although they won’t mind falling behind others. Roosters however, generally have hot tempers, and they could get quite selfish and outspoken as well. Most roosters would also stubbornly refuse suggestions, and they would rather prefer lecturing others.

In general, 2014 would be a fairly good year for roosters, whether it’s in their jobs or business, as well as in their health and romantic relationships. Let’s discuss a few of the work, business, wellness and romantic prospects for them this year.