Among the different astrological systems and concepts created, the Chinese zodiac chart or horoscope is perhaps one of the most intriguing, and most interesting. Why? Because, Chinese astrology adds in a lot of cultural and traditional aspects and beliefs, yet it continues to remain in tune to the basic planetary and celestial concepts of general astrology. Here's more on the  Chinese horoscope description of the  Dog. 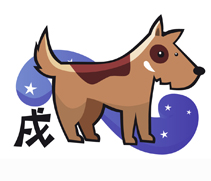 What Are The Crucial Concepts Of Chinese Astrology?

According to experts, Chinese astrology is generally based upon The Five elements, which is believed to interact with natural phenomena. The five elements are metal, wood, water, fire and earth. Each of these elements has their own unique traits or characteristics, and the five elements are assigned to the 12 animal signs in the horoscope. Chinese astrology is heavily influenced by the ancient concept of the Yin and Yang, which asserts that opposing forces both complement and interact with each other. Among the examples of Yin and Yang are male and female, darkness and light, fire and water, passive and active, and more.

When Was It Created?

According to astrology experts and analysts, the Chinese astrology system was believed to have been created somewhere in the 2nd Century, during the reign of the Han dynasty.  Many however, believe the legend which says that Buddha was the creator of the zodiac chart. Buddha was believed to have rewarded the twelve animals who appeared to him in response to an invitation to a celebration, with a place in the horoscope, thus the 12 animal signs. Some however say that early Chinese astronomers created a system that was based on the 12-year orbit of Jupiter, to tell time, and the system included the twelve earthly branches (or animal signs), and this existed long before the advent of Buddhism.

Occupies the 11th place on the Chinese Zodiac, the Dog can be very irresistible because of their thoughtful nature.  They can get involve and take control of any situation, even though they are not directly involved with it. This action can are often misinterpreted by others as being nosy.  In truth, these people mean well.  Chinese horoscope sign for Dogs do not see money and position as priorities.  These people focus more on their family’s welfare.

Dogs’ lifestyle and physical activities are pretty harmonious. They are able to maintain their good health by being happy, and they’re also more focused on keeping themselves fit and active. . The easiest way of identifying a dog’s wellness is by testing one’s character. If dogs are depressed, this means that person may be ill.  They are very focused when it comes to healing their illness.

With regard to work and career fortunes, those born in the year of the Dog are deemed dependable, and are considered as valuable workers. The ideal jobs for the “dog” include being a teacher, politician, judge, nurse, interior decorator and scientist.  When it comes to social and intimate relationships, dogs are often timid, especially when it comes to making friends and courting. However, if a dog likes someone else, they make certain that the individual likes them first, before they ever express their true feelings or interests. Dogs however, are very supportive and emphatic lovers, who are always more than eager to listen to the people they love.

Individuals from this sign are usually timid when it comes to courting or making friends.  If they like you, they make certain that you like them before expressing their true feelings or interest.  Since they are emotionally touchy, they take heartbreaks and disappointments seriously. However, dogs are pretty empathetic, supportive lovers, who are always eager to listen about your day at work or the things that you have accomplished.