The Chinese horoscope, or zodiac, shares quite a number of similarities with its Western counterpart, especially when it comes to basic astrological tenets and principles. It’ monthly birth signs and symbols however are different, because it features 12 animals (rat, ox, tiger, rabbit, dragon, snake, monkey, horse, sheep, rooster, dog and pig).  In the Chinese zodiac, the monkey ranks ninth among all the animals, and like its real-world counterpart, those born in this sign are generally clever, curious, playful and mischievous. These people are also experts when it comes to playing practical jokes, although they don’t have bad intentions (nor would they intend or hurt anyone). Let’s look at the other notable traits of those who were born in the year of the monkey. 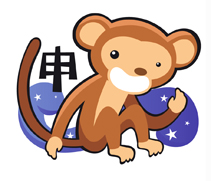 Has the 9th place in the Chinese Zodiac, Monkeys are curious, playful and clever individuals. They like to play jokes and tricks on their comrades. Chinese horoscope sign for monkey likes to start troubles simply because of weariness. This scenario can be pretty hurtful than what they had intended to do. Oftentimes, this playful act can stir-up trouble.

A monkey is very curious being. Other people call it nosiness, while some call it interesting. Even if they are gifted with great imagination and created, they are quickly confused and distracted. They love challenges, and they like watching and scrutinizing people as a past-time.

A Monkey thinks that being in bed all day long because of an illness is a waste of time. Most of the time, these people are in good health because of their pretty active lifestyles. The most common types of illness that a monkey acquires are that of the circulatory or nervous system problem.

Monkeys are excellent when it comes to spending and earning them.  Majority of the time, they don’t really save what they earn. The most suitable occupations for are: Scientists, film director, sales representative, bakers, accountants and couriers.

Monkeys are well-known for them promiscuousness. They use flirtations in order to get the attention of other people just to get what they like. They don’t settle down for long, they like to be constantly stimulated physically for them to stay much longer.

Let’s start with the positive characteristics of those who were born in the year of the monkey. First, they are quick learners, and are generally creative, intelligent sociable, quick-witted, confident, agile and would be more than happy to take on different challenges and endeavors.  Those born in the year of the monkey though can be quite vain, snobbish, deceptive, reckless, stubborn, suspicious, restless, manipulative and self-centered.

Love, Wealth and Health Forecasts For 2014

Here’s a few of the love and relationship, health and wellness forecasts for those who were born in the year of the monkey, for this year.