Tarot Readings and the 5 Suits of Tarot Cards

Tarot Readings and the 5 Suits of Tarot Cards

Despite the continuous and rapid evolution of today’s technology, many people around the world still believe in fortune-telling. Besides, almost everyone wants to have a sneak peak of their future life. Tarot cards, for instance, have never failed to survive the modernization of the world. In fact, tarot cards now also come in online forms and many psychics today make use of them to offer free psychic tarot readings. Like the original form, online tarot cards are typically composed of 78 cards, which are divided into 5 suits. Except for the Trump cards, each suit is a set of 14 cards, including the Ace, numbers Two to Ten, Page, Knight, Queen, and King. 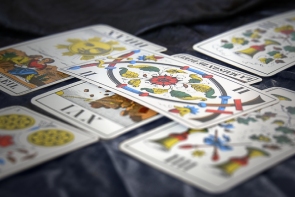 The Suit of Cups

With the element water, the Suit of Cups (sometimes referred to as the Suit of Hearts) pertains to the circumstances or events that have emotional characteristics, including love and family issues. Cups used to symbolize the clergy, known as the First Estate, during the feudal era and that is why they can also represent something that is spiritual or religious in nature.

The Suit of Swords

The cards in the Suit of Swords represent the element of air and thus, can be interpreted as symbol of either freedom or rapid change. On the other hand, this suit of tarot cards also represents the military. That is why others interpret these cards as something that correspond with authority, power, and strength, as well as suffering and violence. In other words, the Suit of Swords signifies the Nobles (the Second Estate).

The Suit of Wands

Also known as the Suit of Batons, the Suit of Wands is the group of tarot cards that signifies the fire element. This suit has been said to be associated with simplicity, poverty, and submission. It can also represent the nature and also the feudal society’s farmer, laborer or peasant classes, which are collectively called as the rural Third Estate.

The Suit of Pentacles (or coins)

In tarot readings, the Suit of Pentacles is composed of the cards that symbolize the town-dwellers, merchants, and artisans who are all classified as the urban Third Estate. Some psychics call this suit of tarot cards as the Suit of Coins it represents possessions, wealth, or any physical body. This suit also corresponds to the classical element of earth and so its cards can also resemble physical characteristics like sturdy build, dark complexion and dark-colored hair and eyes. Each tarot card in this suit features at least one coin or disc that displays a pentagram (a star shape).

The 22 remaining cards in a tarot deck are classified as the Major Arcana, or simply the Trumps. Meanwhile, the first four mentioned suits form the Minor Arcana of tarot cards. Trumps mainly feature a scene that includes several symbolic elements. It may involve one or many persons. Most psychics that offer free psychic tarot readings interpret these tarot cards as something that relate matters with deep importance or purpose. These are unlike Minor Arcana cards that basically correspond to daily and immediate matters of life.