Tarot Home > How To Appreciate The Mystery, And Magic Of Tarot Cards

How To Appreciate The Mystery and Magic Of Tarot Cards

Tarot cards conjure a lot of mysterious images and emotions.  Many see them as nothing but tools of the occult, as they have cards with dreary images like Death, Witches, The moon and the stars, and more. Some however, see them as tools that can help unlock the mysteries of the human mind and soul, as well as the supernatural and paranormal.  The cards today however, are mainly used for foretelling the future, as well as for helping people get guidance and advice on a wide array of issues, from relationship issues to health, career and even family concerns.   Below are a number of helpful ideas on how to understand, as well as unlock the mystery and magic behind the Tarot. 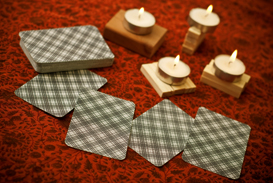 What Are The Different Tarot Card Types?

Tarot cards have been used from centuries, from the ancient times to the medieval periods. There is actually no standard number of cards across all decks, and while most cards will have the same suits and meanings,   their illustrations however, will vary.  The decks available today are based on different themes like fantasy, magic, nature and even animals.  The most popular tarot deck however today is the “Rider-Waite” deck, which was originally created in 1909 by a famous occultist named A.E. Waite, and continues to be published by Rider & Company. This deck is considered as the most “definitive” tarot deck in the US, Canada and Europe.

The tarot card is made up of two sections – the Major and Minor Arcana.  The two sections overall have 78 pieces, and the minor Arcana’s four suits include the Wands, Swords, Cups and Pentacles (Circles). According to tarot experts, The Major Arcana’s picture cards have meanings which relate or refer to specific approaches in life (concepts, principles and ideas), while the Minor Arcana’s suits depict, or represent the practical issues, as well as the ups and downs in daily life.

How a Tarot Card Reading Is Done

Before conducting a tarot card reading, the cards are shuffled by the person who is receiving the reading. The person who is receiving the reading must also focus, or concentrate on a major question or area, for which they wish to receive guidance or advice. And once the cards are shuffled, and the deck has been cut too, the reader will lay out the cards, in a pattern that’s called a “spread”.  Each position in a tarot spread has its own meanings, as there are different types of spreads used today, from the single card spread to spreads which include all the 78 cards. Tarot card experts stress that the type of spread used will be up to the reader, as well as what type of question or reading is done. Some tarot card spreads will delve on emotional matters, while some will focus on career or health concerns. One of the most popular Tarot card spreads in history is the Celtic Cross Spread.