Your date of birth, planet, sun sign used in Astrology

Astrology reports and charts are based on the time and date of your birth. The astrologer determines what planet is in ascendance in the eastern horizon at that time. This particular planet governs your sun sign. The traits of this planet influences your personality, character, attitudes and so on. Sometimes it so happens that the ascendant planet is yet to quit its slot when the following planet enters the ascendant position so that the arches of the two planets meet each other. This contact is called cusp. If you happen to be born during the cusp, your personality traits are influenced accordingly. 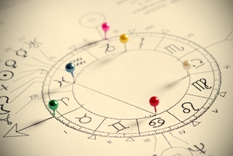 Since the revolution of the stars is orbital, their figurative expression on paper can look like a wheel or a circle which is divided into twelve pie shaped sectors, whose magnitude of 30 degrees can be arrived at by dividing 360 degrees by 12. This circle contains the symbols of the planets placed according to the time and date of your birth. If your wheel chart were a clock, you could see your ascendant or rising sun in the 9 o’clock position.

The wheel chart also contains the astrological houses through which the various planets pass in the course of their revolution. While some planets like Mercury complete their revolution at a great speed, there are other planets like Jupiter, which move quite slowly. They either cross each other as they move along or stay together for some time in the same house that relates to the sun sign of your birth. Their confluence too casts its influence in determining the traits of your personality, nature and also your future.

One thing may be noted that howsoever accurately the charts may have been constructed, it needs the Psychic Intuition of the astrologer to interpret and prepare their reports.

Some times, the seeker may have forgotten his/her date of birth. In such a scenario, the astrologers build the astrology charts on the basis on their intuition about the apparent personality and nature of the seeker.

Chat to a Psychic Reader and get your astrology reports and charts prepared or read.