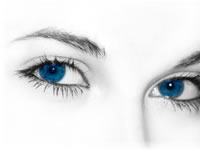 Psychic eye is the special faculty of the psychics that enables them to have an insight into the hearts of the people, their problems and also their future. It is also known as the third eye or the spiritual eye.

It is believed that the primeval man was endowed with the spiritual or the psychic eye. He could see beyond the space and time in his daily life. Psychic eye or the third eye is located in the small endocrine gland. It is shaped like a small pine cone and resides in the centre of the brain -- between its two halves. This probably explains whey the gland is also called pineal gland. It nestles in the centre of the forehead somewhere between the two eye brows.

Spiritual gurus associate third eye or the psychic eye with the sixth chakra located at the base of the brain. It has its connection with the forehead of the human being.

Psychic eye is believed to be the fountain head of the major psychic powers such as clairvoyance, intuition, imagination, hunch or sixth sense.

Atrophy, as they say, is the law of nature. With the passage of time, the power of the third eye dissipated due either to natural process of wear and tear or its misuse.

Another factor that may have led to its atrophy may have been the so-called advancement of knowledge and civilization that has increased the gap between the man and his moorings into nature. It has ushered in the artificial ways of living and thinking.

Despite the general atrophy, some dedicated people called psychics, sages, holy persons, seers and spiritually realized gurus have been able to retain the power of the psychic eye through sustained efforts in meditation and practice of the ancient beliefs and systems. They have managed to keep the psychic eye, the spiritual or the third eye as active as it was in its primeval state.